Act I - The Before Times

March 16th, 2020 was the last day of the Before Times for me. It was the last day I thought I was going to have an ordinary day working in NOAA’s offices before going home to my beloved Greenwood neighborhood. We got the word late in the day to pack up and take our laptops home and prepare to work remotely for at least two weeks. I hated this idea. I didn’t want to lose the enjoyment of working across from my best friend all day, or going out to lunch, or having casual hallway conversations. I didn’t like the idea of being alone all the time.

I’ll complain and moan for a while when work compels me to do something I don’t want to, but ultimately I know which side of the bread the butter is on, so I soldier up and do what needs to be done. I, my bestie, and his housemate at the time packed up our laptops at the usual time and made our standard goodbye stroll to the parking lot. They walked slow to smoke cigarettes before starting their brutal hour + commute northward. I just enjoyed the chat.

They finished their smokes and it was time to part. Some place of deep knowing inside me opened up and I would have said then that I feared, but really I knew that it was going to be much longer than two weeks before I saw them again.

Memories of our mom flooded me. She was a WWII veteran born and raised in England. She often told us that one of the things that got her through the war was Very Lynn’s recording of We’ll Meet Again written by Ross Parker and Hughie Charles. Mom and I would sing it together when I was a teenager while we danced in the living room. She showed me then the power that music has to reach us when nothing else can.

My best friend and his housemate stared at me as I came back from wherever I had gone and started crying.

I drove home and as I passed through the little business district I think of as ‘downtown Greenwood’ past the restaurants and bars where I spend some of the happiest hours. As I did, the song came out of me again and I felt certain that there would be a shutdown and these places would be dark and silent for an unknown amount of time. It felt like the end of the world.

You can listen to a wonderful rendition of this song by a choral group from England called the D-Day Darlings here:

The second thing that Mom said got her through the war was knowing that then Princess Elizabeth was serving in the military just like she was.

On April 5th, 2020, Queen Elizabeth II made an unprecedented speech about the pandemic. The whole video is worth watching, especially if you are an American who doesn’t understand the value that Her Majesty brings to her people. If you are short on time, though, you can jump ahead to minute four. She makes reference to We’ll Meet Again in encouraging everyone listening to remember that better days are ahead and that we will overcome this problem.

It felt like she was speaking directly to me; or that someone was.

Inspired by viral videos of musicians in Rome under severe lockdown orders singing and playing instruments from their balconies (sometimes collaboratively with other balconies!) I decided that one small thing I could do was play harp from my own balcony. No one would hear, of course, because it overlooks noisy Greenwood Avenue. My favourite time of day to be here at my condo is sunset. I have a pretty good view of the Olympic mountains to the west and there are times when the sky is breathtaking. I decided that would be the time of day I would play music. It would give me an anchor, and by following the sunset later and later in the day I would keep myself oriented toward the world beyond my four walls.

I had the idea of doing a Facebook live broadcast of these sunset shows, so on March 21st, 2020 the first episode of Sunset Harping happened. I continued to produce half-hour episodes about four times a week and gathered a surprisingly large and loyal following. The show did what I intended. It gave me a relief from feeling alone and it gave all of us an anchor in each day to stop, breathe, and assess.

By early July, there were some temporary reductions in Covid restrictions, which allowed me to invite guests to be on the show with me. One of them was my friend Fae Weidenhoeft. She is a fabulous singer songwriter who I met when she started taking Gaelic classes in the Zero to Gaelic program and singing in the choir. Fae is a blazing talent and a fabulous human and I was delighted to have her with me on the balcony. Over dinner we discussed what we would do on the show and she brought up We’ll Meet Again. It was one of the songs she wanted to perform on the show and she knew it was special to me, but not why, so I told her.

We started the show off with that number with her on ukulele and singing lead. I had worked out a harmony for some parts, but the song has far too many sudden changes of sharps and flats for a lever harp, so I didn’t play. It was an absolutely magical moment. You can see it here: 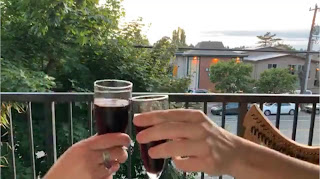 Act III - A new instrument and a neglected set of skills 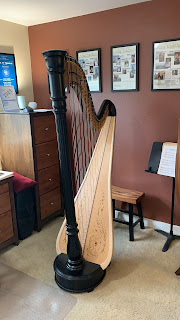 My music career has been thoroughly and happily devoted to the music of the Gaelic-speaking people of Scotland, Ireland, and Nova Scotia. My original education, however, was in classical music at Cornish College of the Arts. It took a while before I really found my feet and started to excel, but I managed it. By the time I graduated, I put together a program for my senior recital that included a very respectable collection of mainstream, challenging pedal harp pieces.

Traditional music by and large, doesn’t call for huge range and full chromatic capability of a classical harp, but is better served by the smaller, portable, more resonant, and less expensive lever harp. I have two artist quality lever harps. One was made for me in Scotland, and the other right here in Seattle. They are wonderful, fulfilling instruments that are perfectly suited for what I have done with them. No complaints there.

Although I had completed my degree in classical music, I never owned my own classical harp. I rented a small one from my teacher and regretfully returned it shortly after finishing my degree. I was soon off and running into the world of traditional music, and my investments belonged in instruments that would serve me there.

In 2011, the World Harp Congress was held in Vancouver BC, and my friend Alys Howe with whom I preformed in a harp duo, got us booked to do a concert of music from Scotland and Cape Breton. It was great fun. While I was there, I also spent a bit of time in the vendors hall looking at all the instruments including the classical harps. A spark of interest grew in me.

It took a decade for that spark to grow into action, but in February of 2021, when I was due to receive my inheritance from my parents, I placed an order for a new Lyon and Healy pedal harp. It arrived near the end of June and it was time for me to dust off a stack of music I hadn’t played in 30 years or more. Although my hands could play all the right strings, on a classical harp you have to move seven pedals at the base of the instrument, each of which has three positions, to get all the sharps and flats. That skill was a bit rusty. Like really rusty.

I had the idea to use We’ll Meet Again as a kind of study piece. I pulled out the sheet music that Fae had given me a copy of and spent an evening working out what all the pedal changes would be to get all the right sharps and flats at the right times. It turns out there were quite a lot, so it has been a great exercise.

It has also given me a way to take ownership of the importance of the song in my life. Mom taught me how to find hope in dark times through her love of that song. Queen Elizabeth told me that things would get better again, and I believed her because she touched the place that song holds in my heart. Fae wanted to know why that song mattered to me, because I mattered to her.

Now I can play We’ll Meet Again whenever I need to remember those things.

Seumas Gagne
Seattle, Washington, United States
I'm a 50-something traditional musician, Gaelic teacher, web developer, social critic, and gay Pagan activist. I'm an unapologetic ENFJ. I'm the child of an Englishwoman and a French Canadian man (Anglophone). I'm a dual US/UK citizen married to a wonderful Canadian man. I'm lucky to be surrounded with a virtual army of brilliant, brave and insightful friends. Our conversations lead me to ponder deep questions of culture, history, language, and the future.